Whether it’s an email, landing page, book, white paper, video or blog post, your title has the power to make or break how it performs.

A catchy headline ensures that more people in your target audience want to read your content, while a bad blog post title can push them away.

So when writing, publishing or promoting your next piece of content, you must take the time to ensure the best headline copywriting.

In this post, we will review the key steps that lead to catchy titles, along with headline examples to help you understand better.

A catchy headline establishes instant rapport with your intended audience. It should clearly indicate the readers it’s meant for, why they should take the time to read the content that follows, and what’s the benefit in it for them.

The following best practices will help you craft irresistible article titles that promise to attract readers and engage their interest in your content.

It’s not possible to use all these tricks at once to write a headline, but you can combine two or three of these to generate catchy titles.

Good headline copywriting is about describing the main benefit that your content offers your audience. Catchy titles indicate the solution to a pressing problem or help with accomplishing a desired objective.

For example, take a look at this headline example:

Fundamentals of Web Design For Beginners

This blog post title describes what the content is about. But it doesn’t convey the benefit readers can expect. Let’s see an alternative:

Looking Good On The Web: Newbie’s Guide To Web Design

Now this catchy headline doesn’t just convey what the content is about, but also describes the benefit for the reader.

Use Headline Templates For Inspiration

If you’re stuck and not able to think of article titles, going through a list of proven headline copywriting examples might just get your creative juices flowing.

Here are some prominent lists available for free on the web to help you write a headline:

However, remember that just copying and pasting form such lists without any original thinking on your part can have the opposite effect.

Writing titles that have already been used by hundreds of copywriters before you isn’t worth the effort.

So these alone cannot make your title stand out. Make sure to use them as a starting point only.

Consider adding supporting information that associates specificity or urgency as per of your headline copywriting. The most common way to do this is using numbers.

Numbers are useful when you want to add an element of structure to your content. Including numbers in your headlines can double your social shares, as well as increase clickthrough rate by 36%!

They also make big, overwhelming projects seem like they’re easy to achieve. Because now the project can be broken down into small steps.

There are also occasions when numbers can be utilized for urgency. In such cases, they work because they give the reader a time-table for winning. For example:

The title shows how quickly the prospect can learn MS excel and make it seem achievable.

Whenever possible, address your target audience in your headline. This makes your content seem as if it was written specifically for them.

You can address your readers by naming something they identify with, like their occupation. For example, here’s a catchy title which targets readers by their profession:

Get organized now: A 7-day productivity workshop for writers and artists

Or you can describe their attributes or circumstances. Here’s a headline example:

Either way, the closer you are to identify them, the better. Another way is to target your audience by calling attention to what they are not. For example:

Analyzing financial statements (even if you’re not a maths whiz)

Research content similar to yours and see what kind of blog post titles are being used. For example, you can do a quick Google search, or browse related books on Amazon.

The idea is not to copy but find a way to write catchy headlines which are different from the rest. See which audiences or pain points haven’t been addressed, or angles that no one has touched upon so far.

Then use this information to make your article title stand out. For example, a few days ago I was writing an article on creating and managing a content calendar.

When I researched similar content, I noticed that most of the article headlines were referring to making or building a content calendar.

But almost none were addressing the main benefit, or answering why someone would want to create a content calendar.

So after some thought about writing a headline, this is the title I chose:

How to scale content creation with an editorial calendar

As you can see, I didn’t just mention that the article is about content calendar, but also the reason a reader should be interested in it. I emphasized that it will help the reader scale content creation.

Trigger A Sense Of Curiosity

When writing a title, you want to make it memorable and exciting. There are several headline copywriting techniques you can use to hook your audience

One way is to use metaphors. These are words based on concepts your readers may already know. So you take one of these metaphors and connect it with your topic.

A great example of this is Jay Conrad Levinson’s books and other material on “Guerrilla Marketing.” It links the concept of guerrilla warfare with that of marketing to create a compelling headline.

Since guerilla warfare consists of unconventional ways to succeed, a reader can understand that he would get the same kind of content related to marketing.

This also makes the readers feel smart for being able to connect the dots, creating another reason for them to click through to read the content.

Another example of metaphor-based titles is the “Chicken Soup for the…” book series.

The series conveys a sense of warmth and nurturing by referring to a common meal traditionally served in families when they’re unwell..

Another way to arouse curiosity is to use unexpected or contradictory terms. Catchy titles like “Rich Dad Poor Dad” or “The Wealthy Barber” take advantage of this method.

The contradiction between “rich” and “poor” compels the target audience to discover how the combination could be possible.

Tim Ferris also used this concept with great success when he launched the book “The 4-Hour Workweek: Escape 9-5, Live Anywhere, and Join the New Rich”.

It promises to make something which seems highly unlikely to be possible. So anyone who views this headline example would want to find out how.

Posing a question in your blog post title is a great way to make it more click-worthy. People have a natural inclination to be drawn towards a question and find an answer.

So when you craft your title as a question, search and social media users will want to click your title.

You can also use a tool like Text Optimizer to find popular questions related to a keyword you enter.

You will get a list of questions sorted by popularity and organic competitiveness, allowing you to write catchy headlines with questions.

If you want your content to be found more easily by your target audience, it’s important to research and include keywords and phrases they’ll use to search.

And not just that, keyword research will allow you to see what words and phrases people use to refer to your topic.

So by embedding those keywords when writing a headline, you are also ensuring that you speak in their language.

Using relevant keywords when writing titles plays a big role in generating organic search engine traffic to your content. To find the best keywords to include in your title, you can use a keyword research tool like KWFinder. 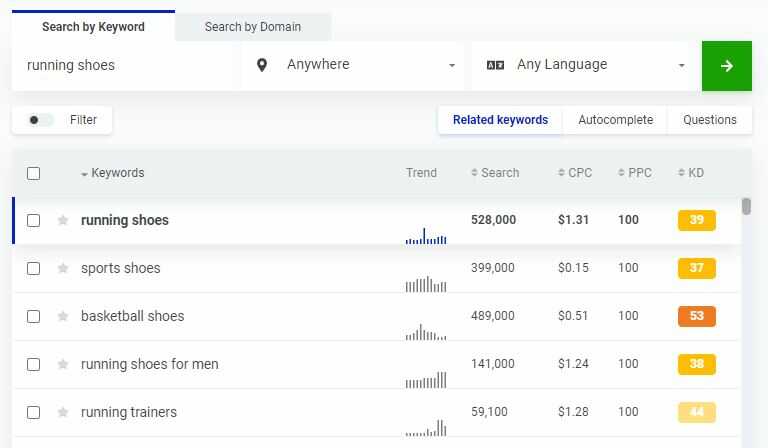 All you need to do is type in a keyword, and it will show you hundreds of related keywords with search volumes and SEO difficulty score.

This allows you to find keywords to use in headline copywriting that are easier to rank high in search engines.

Use A Headline Analyzer

A headline analyzer can analyze your headline based on multiple factors. The end result is usually quite revealing.

For example, CoSchedule’s headline analyzer checks your title for the following aspects:

Word choice analysis - It breaks down the words you pick into motional, common and power words to ensure that you are using them in the right proportion.

Headline length analysis: It checks your headline for optimal length. If your title is too long or too short, you’ll need to fix it for better CTR.

Sentiment analysis: It checks if your titles convey a strong positive or negative emotion.

Running your headlines through the tool will give you a ton of insights on how you can improve it going forward.

Another similar tool in this category is EMV Headline Analyzer, which assesses the emotional value associated with your title.

There’s a reason content marketers and copywriters focus more on catchy titles and calls to action than anything else. Catchy headlines have more impact on your overall engagement and conversions than you may think.

Think about how you browse books or magazines placed on a rack. You don’t pick up something unless the title catches your attention. Same goes for web content.

In the digital world, clicks are the currency. If you’re not bringing your A game when writing headlines, you’ll struggle to get an audience for your products.

So go ahead and put these lessons and headline examples into action to produce the best titles possible for all your content.

Did I miss anything? How do you approach headlines? Do you have any questions or comments? Share your thoughts below in the comments section.

My team & I help brands with superior content marketing services, tools, and insights to boost traffic and lead generation.